We rode the train recently in Strasburg, PA. It was actually the first time I had ever been on a train. I am sure if Max were older, he would have loved all of the trains! 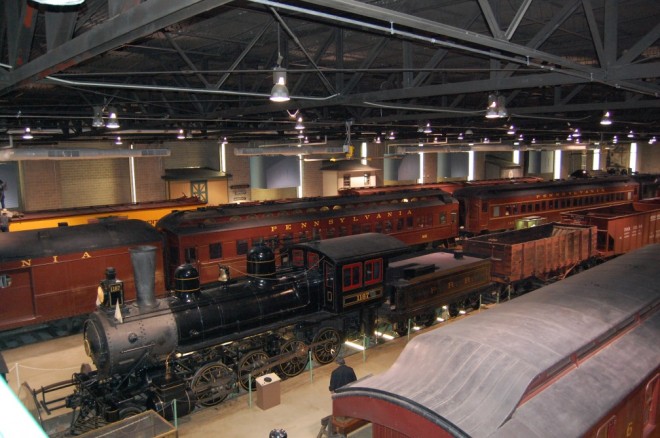 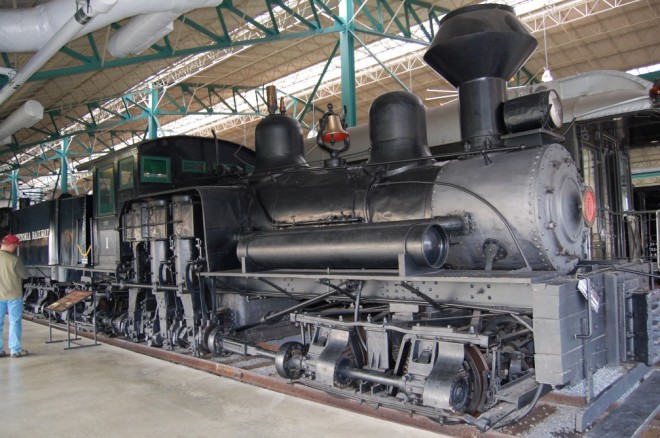 On our way home from our visit with both grandparents, we made one more stop before home. We turned down an old familiar road in a neighborhood I saw through the car window every summer as a child. We were in my grandparent’s neighborhood in Louisiana.  We usually try to stop by every time to let them see the children and visit for a bit.. but to me it takes me back in time.  The house is exactly the same as I remember it.  The items on the shelves are in the same place as they were when I was there every summer.  I always used to say, my grandparents lived 10 hours from everywhere we lived. I couldn’t wait to get out of the car and get inside to see what new thing my grandfather, Dida, had carved, painted, or built.  My grandmother, Henrie, would always have cookies ready in tins around the house.

My grandfather, I called Dida ever since I could speak, is sharp as a tack at age 90. He is amazing and can recall everything with accuracy. I spent many summers watching Dida carve new things out of wood, like barn owls, ships, and people and animals. He would find various shaped bottles and fit very delicate and detailed ships in them and secure them ( somehow!)
Please indulge with me and go back in time down an old dusty road, where the train comes around the track.. where memories are made…

Most of the buildings were all hand made and painted by Dida.

In the summertime, we would drive up to Oil City and visit my Great grandmother who lived in an old neighborhood with a train track that passed in her backyard. I would go place pennies on the track and wait. Oil City looked very much like some of these roads I see here on Dida’s train table. 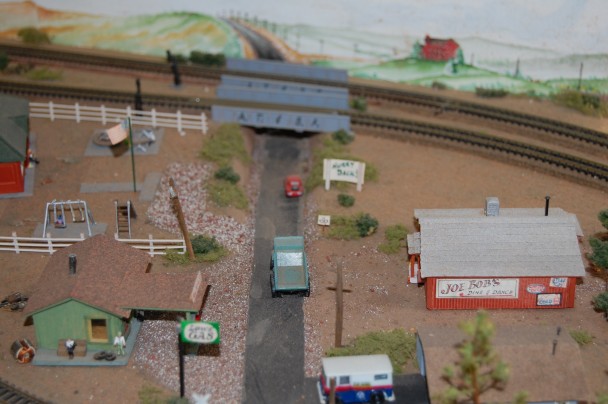 The walls of the train table are all painted to create a beautiful landscape that makes you feel as if you are part of the scene, as you depart this little town and read the sign, “Hurry Back!”

Looking at the Workshop behind my children, the items are covered in dust as they hang just as they did when I was their age.

The train takes you past so many places, to include a farm, a lumber yard, a airport, and even a fishing pond.

I love to see the joy in these kids.. even the 90 year old one.. at seeing a train coming around the bend.

What you can’t see behind all the children are all of the woodworking tools. Dida could make anything out of wood.
I did a little fishing with Dida when I was there in the summers. Mostly, I would dig for the worms, he would hook them, I would get the fish to bite, he would take them off the hook, and Henrie would fry them up.

And what’s an old town with out a “Daniel Boom’s” Gun shop?

Here is my grandmother, I always called Henrie. As a child I just knew I thought of that name as I thought of Dida trying to say Granddaddy. It wasn’t until I was much older I realized Henrie was her real name. Henrie is a huge fan of doll collecting and music boxes. She also thinks it is fun to see people taller than her and hopes one day God will let her be tall in Heaven. 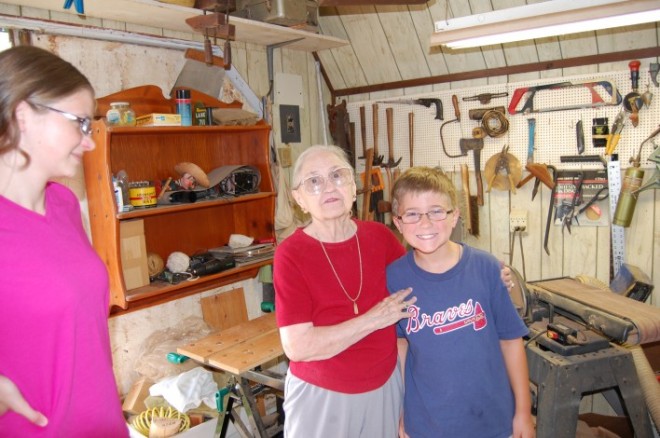 Most of my summers were of me at my Grandparents homes ( Both sets lived in the same town) My sister and I were so far apart ( almost 8 years,) so most of my memories of being there were of me alone with my grandparents. I used to think it was so cool that when you went into Dida’s shop and turned on the light, the radio came on and Dida could name every single classical song and whistle along. He collected sawdust off the floor and would bag it up to create a bag swing for the tree out that back window. The swing is gone now and the tree is too. This picture means a lot of me because nowadays, Dida doesn’t like to be photographed. He agreed to let John take our picture. I’ll need to print one out and send it to him. Henrie loves to check the mail, So I think I’ll get on it today.

Perfect shot, coming out of his workshop!

Who are we? We are a Catholic Military Homeschooling family of 9 I am Emily and I am married to my best friend, John '95. Our dc all have nicknames of course... Cookie, the baker '97, Opie, b/c he reminds us of him from Andy Griffith '00, Moonbeam, her eyes disappear when she smiles '02, Bluebelle, who loves Homoon ( ice cream) '04, and M&M , baby initials '07. We also have four little saints of our own in the arms of our Lord, Luke born into heaven, Dec '05 Mark, born into heaven, Jan '08 and Karoline, born into heaven May '08, and Matthew Karol, who spent three wonderful days with us before going home, July '09 After several years, we welcomed Max, who joined our family May 4, 2013! and just so he'd have a buddy, Our new little Rose joined us on October 16th!

The Measure of a Man's Real Character is what he would do if he were never found out.